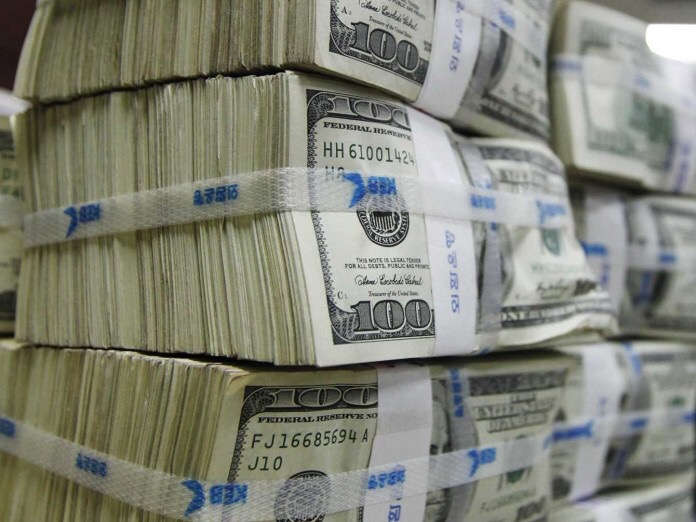 All week, Nigeria has been buzzing with news of the latest and most spectacular discovery of illicit cash, stashed away in an apartment on the 7th floor of a building in Ikoyi, a posh, leafy suburb of Lagos. The Internet was awash with video footage of EFCC* officials, sweating as they counted hundreds of $100 notes in bundles of $10,000 each – still freshly minted and wrapped in plastic. Speculation mounted until the results were in – an astonishing US$44 million, plus thousands of pounds and millions of naira to add variety.

The find was prompted by a ‘whistle-blower’, encouraged by the federal government’s promise of a generous percentage of any money found looted from the treasury, ‘chopped ‘ from a ministry or agency, or received as a bribe for doing government business. The new policy has created another opportunity for marginalised citizens to achieve their financial dreams, while getting their revenge on those chiefly responsible for their poverty.

Social media was alive with curses for the unknown culprits, who are likely to be punished by God for their wickedness, if the chatter is to be believed. Soon there were various unsubstantiated reports of who was to blame, thanks to a largely inept media and the readiness of social media pundits who thrive on rumour. Unsurprisingly, one of the suspects, the owner of the apartment building, is a very powerful politician and known to be spectacularly wealthy, despite a career in low-paying government and politics. Another rumoured suspect is a former state governor – his successor is claiming quite confidently that the money is part-proceeds of an asset sale that went missing and should be returned immediately. The only thing that is certain is no one will go to jail.

However, none of this is news to me. I remember telling friends well before the last election that, with looting at an unprecedented high over the last few years, Nigerians will never know how much money has been stolen or taken in bribes by government officials. Never. As news trickles in about huge bales of cash found in overhead water tanks, outhouses, hidden safes and strong rooms in residences, the rest of the money is hiding in plain sight.

The people agog now, because they can see images of piles of cash, are the same ones who have never questioned the huge mansions, private planes, extravagant lifestyles and legendary profligacy of politicians whose only legitimate income is supposed to be quite modest and open to public scrutiny. Instead, the wealthy politician is an accepted part of society, feted wherever he goes, with a gaggle of hangers-on and apologists anxious to do his bidding, all in exchange for a few crumbs from his overladen table.

In my home country of Jamaica, the politicians have the same corrupt tendencies and we’ve had our fair share of scandals over the last forty years. Although it’s on a much smaller scale, the result is the same – an incalculable damage to society, in terms of lost opportunities, high unemployment, poor education, inadequate healthcare and unfair business practices. In fact, the roots of Jamaica’s violent crime lie in the desperate struggle for political power in the 1970s, when youths in impoverished, inner-city communities were armed and set against each other.

Today, Jamaica is an apparent island paradise, with some 4 million visitors projected this year; but that violent underbelly has continued to hinder economic and social development for the masses. The only thing that has kept us from the brink of abject poverty is the stubbornness of good people who refuse to give in to the corrupt few, holding them to account and publicly chastising them on talk radio, in newspapers and online. A vigilant media investigates scandals and keeps going until there’s a resolution, even if it takes years.

Who can forget the expenses scandal in the UK, a few years ago, when MPs and Lords were found to be lying about their claims for housing and travel? Even though it involved thousands, not millions, of pounds, the British public was incensed. The guilty had to pay back every penny and apologise publicly; some went to prison; others were de-selected by their local constituency parties before the next election or forced into early retirement. None escaped.

My point is, it’s not them, it’s us. Politicians will be politicians, even in countries where they come from the professional, middle and upper classes. Power has the tendency to corrupt those who possess it and it’s only the honest citizens who can hold them to account. Nigerians are inclined to bow to power and position – it’s a cultural thing, I’m told. However,  does tradition dictate that even as your leaders are robbing you blind, you will continue to bow?

I’m always fascinated by people who characterise a rich politician as a ‘good man’, simply because he has tossed a few thousand naira to them from the billions he has taken illegally. One of the rumoured owners of the $44 million was well-known for dispensing $100 tips to any workers he saw in the grounds of the afore-mentioned apartment building – a very ‘good man’. Now everyone knows one possible source of his largesse, although anyone with an enquiring mind would have guessed the truth.

It’s not them, it’s us. We continue to hold common thieves in high regard and call them ‘honourable’. We excuse the signs of ill-gotten wealth, saying it’s ‘just the way things are’. We accept that our senators live like millionaire playboys, with flashy cars, huge, tasteless houses and well-groomed harems. We smile at the antics of a First Lady who became a multi-millionaire in just six years of a presidency, with no visible business interests. We boast when any of these reformed touts and dubious characters in public office grace our events with their presence. And, given that we all work so hard while they live this gilded lifestyle, we long to be them. We would take their place happily, knowing that we too would be accepted, no matter how heinous our crimes.

It’s not them, it’s us. We are the only ones we can rely on, if we are serious about reducing corruption in society. The security forces are on the take, the media has been bought and the judiciary has been seriously compromised.

So, who do you rely on? Who do you trust? Who else will hold elected officials, public officers and political parties accountable? If it’s not you, then who? And if not now, then when?